Discriminating against Scientologists in Germany is illegal, Federal Court said 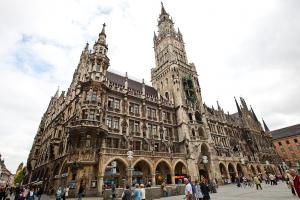 Munich can not exclude a citizen from pedelec (e-bike) funding based on “refusal to distance herself” from Scientology. Federal Admin Court condemns Munich.

Demanding declarations of belief is not a matter for the local city council within the meaning of the first sentence of Article 28(2) of the Basic Law, so the defendant already lacks competence”

MUNICH, GERMANY, April 6, 2022 /EINPresswire.com/ — Munich can not exclude a citizen from pedelec funding based on “refusal to distance herself” from Scientology. Germany’s Federal Administrative Court [BVerwG.de] condemns the City for discriminating against a member of Scientology.

According to a statement by Germany’s Federal Administrative Court, a “municipality may not make the granting of a financial subsidy with which environmental policy objectives are pursued subject to the condition that the applicants submit a declaration distancing themselves from the Scientology organisation.“. This was decided today by the Federal Administrative Court in Leipzig.

The applicant applied for a grant for the purchase of a pedelec based on the “Electromobility Funding Guidelines” of the defendant State Capital Munich. In doing so, she did not submit the “Declaration of Protection Concerning the Teachings of L. Ron Hubbard/Scientology” contained in the application form. With this, the recipient of the grant declares not to apply the teachings of Scientology, not to disseminate them and also not to attend any courses or seminars of the organization.

The Federal Administrative Court confirmed the appeal judgement. The defendant must not make the funding dependent on the submission of the Declaration of Protection. Demanding declarations of belief is not a matter for the local city council within the meaning of the first sentence of Article 28(2) of the Basic Law, so that the defendant already lacks competence.

If such a declaration is demanded and its refusal is linked (leads to) to exclusion from funding, this specifically interferes with the freedom of religion and belief guaranteed by Article 4 (1) and (2) of the Basic Law. The interference is already unconstitutional for lack of a legal basis.

Finally, the defendant’s [Munich City Council] approach violates the general principle of equal treatment (Article 3(1) of the Basic Law). It constitutes an inadmissible differentiation because it does not delimit the group of persons entitled to financial subsidy appropriately, but according to criteria that have no connection with the objective of the financial subsidy. Since all other requirements for funding are fulfilled, the defendant is obliged to grant the plaintiff a corresponding commitment.

Scientologists have been for several years engaging in defending their rights at courts in Germany and also advocating at the OSCE and the UN for their religious freedom to be respected by German authorities.

Last September 2020, Scientology had requested the UN to launch an investigation on Germany for violating religious freedom, and in fact, the Special Rapporteur on FORB Ahmed Shaheed had previously written a letter to the German government inquiring about their practices of discriminating against Scientology. While the Scientologists still have some work to do to get their rights respected by German officials, it seems, said Ivan Arjona, that “persistence in court, international exposure and above all, proper abidance to the law and justice system, is paying off to make Germany stop discriminating against Scientology”.

In this regard, the resolution just adopted by the 49th Session of UN Human Rights Council, “A/HRC/49/L.5 Combating intolerance, negative stereotyping and stigmatization of, and discrimination, incitement to violence and violence against, persons based on religion or belief” calls on States (and this includes Germany):

“Calls upon all States: (a) To take effective measures to ensure that public functionaries, in the conduct of their public duties, do not discriminate against individuals on the basis of religion or belief; (b) To foster religious freedom and pluralism by promoting the ability of members of all religious communities to manifest their religion and to contribute openly and on an equal footing to society; (c) To encourage the representation and meaningful participation of individuals, irrespective of their religion, in all sectors of society; (d) To make a strong effort to counter religious profiling, which is understood to be the invidious use of religion as a criterion in conducting questionings, searches and other law enforcement investigative procedures;”

Will some of the German authorities continue discriminating against Scientology and others despite the above? This is an open question to be seen.