States are Being Buried with East Coast Waste, Part 1 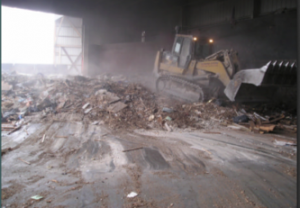 East Coast transfer stations must move fast and furiously and there is little time for waste inspections. They crush the different wastes to maximize the payloads on CSX trains and fleets of long haul trucks. Photo courtesy of the Ohio EPA. 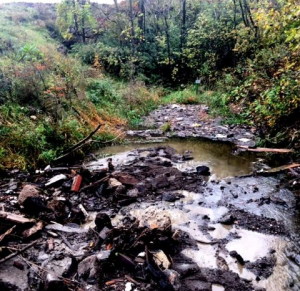 Waste contaminated creek next to Lafarge’s Lordstown Landfill in northeast Ohio. Lordstown takes 95% of its waste by rail from the East Coast. Hundreds of complaints of odors and illness have been filed. Ohio EPA consent orders in 2016 and 2019 have accomplished little.

300 angry residents from Seneca County in northwest Ohio, protest at a meeting with Waste Innovation’s Sunny Farms Landfill in June 2022. Sunny Farms takes 97% of its waste by rail from the East Coast. Putrid toxic gases have ruined the appeal of the entire region.

Agencies talk about the “rotten egg” odor as if it was old food smelling up your refrigerator — but simply put, this mélange of foul smelling sulfuric gases is extremely poisonous and deadly.”

CLEVELAND, OHIO, US, June 28, 2022 /EINPresswire.com/ — Garbage and demolition waste pouring out of New York and New Jersey has been happening since the early 1980’s. When it started, Ohio and Indiana residents actively protested against being the dumping ground for East Coast megapolises.

In 1991, Congressional hearings were held in which they concluded the Interstate Commerce Clause protected the constitutional right of waste generators to haul wherever they wanted — the Midwest protesters were trumped.

Also, in 1991 the United States Environmental Protection Agency (USEPA), through The Resource Conservation and Recovery Act’s (RCRA) Subtitle D regulations, standardized minimum solid waste landfill design criteria and trash management requirements. It seemed while millions of tons of New York waste were being shipped in every direction (including Africa), at least there would be environmental controls wherever it landed.

The USEPA passed enforcement responsibilities of the new regulations to state environmental agencies like the Ohio EPA, the Indiana DEM and the South Carolina DHEC. Ohio, in turn, passed many of their enforcement controls, like approving or denying the annual landfill license applications, to the local health departments.

When New York’s Fresh Kills mega-landfill closed in 2001, the shipments to western states intensified. Disposal prices skyrocketed. Lines of trucks a half mile long jockeyed for position at landfill gates in states as far as Iowa.

Midwest landfills could not resist the massive profits but were overwhelmed with the influx of East Coast waste and the aggressiveness of the New York and New Jersey operators.

Massive odor, noise, dust, litter and vermin nuisances exploded throughout the states. Due to numerous grandfathering clauses, many landfills were not required to implement the new environmental standards. Groundwater and surface water resources were contaminated wholesale.

Older Ohio landfills created huge environmental and social problems and the resulting political pressure on the Ohio EPA to take action was enormous. License applications were denied, gates were locked, injunctions applied, and appeals denied. Non-complying landfills were put out of business.

Tens of thousands of tons of waste rush into transfer stations every single day located in Long Island and Farmingdale in New York, Newark, Hudson and Paterson in New Jersey, Boston and Norfolk in Massachusetts and Hartford and Brockton in Connecticut — just to name a few. The waste must move out fast and furiously by 6:00 PM before the next ten thousand tons promptly arrives the next morning. Being short of time and long on consequences results in minimal inspections of the thousands of trucks passing through — and the demolition contractors know it.

CSX is one of only two Class I railroads in the US and services much of the East Coast and Midwest. They charge approximately $2,000 a railcar to haul waste from New York to Ohio. But garbage and demolition waste—which should be mostly wood, shingles, aluminum and vinyl siding, plaster and drywall—are relatively lightweight materials.

To cure this problem of having expensive but light loads, the transfer station operators pulverize and shred the in-bound wastes with loaders and dozers until they are dense and consequently unrecognizable. The crushed mess gets loaded very quickly onto the railcars and long-haul trucks which are now cost-effective, if questionable, payloads.

Better yet for the waste operators, construction and demolition waste (“C&D”, of which demolition comprises 90%) is considered inert or “almost harmless” by regulators and does not need to follow the federal and state regulations that garbage must—and consequently is much cheaper to dispose at landfills.

The pulverized material looks like raggedy mulch, and no one is able to visually tell if it was garbage, demolition or, for that matter, sewage sludge, industrial or hazardous waste.

Sewage sludges, hazardous and infectious wastes cost up to twenty times the cost of C&D waste to legally dispose. C&D is at the bottom of the waste price chain but whose toxicity is woefully underestimated by the EPA. Blending illegal wastes with cheap C&D is called “cocktailing” and the practice is alive and very profitable.

2005 was a pivotal year in Ohio. Their legislature held hearings in Columbus about the huge flow unidentifiable, out-of-state waste as well as the financial restraints and resources of the local health departments who were trying to enforce the new regulations.

Ohio HB 432 was passed, which was well-meaning but lacked foresight. It banned pulverized demolition waste and gave local health departments and other agencies $1.60 to spilt for every ton of C&D disposed in landfills. This represents millions of dollars to health departments which are typically challenged to pass an operating levy every decade. A legislated conflict of interest was created.

Every aspect of the current construction and demolition waste fiasco is like death from a thousand cuts for the residents in landfill-burdened communities. Huge landfills in Ohio are creating serious health threats locally while taking 97% of their waste from New England.

While groundwater protection and methane control have been a paramount landfill issues for the EPA, managing the massive poisonous sulfuric gas issues created by C&D and cocktailed wastes, has been overlooked until recently. Regulatory agencies are stumbling with solutions or downplaying the toxic landfill gas problem due to a lack of knowledge. Agencies talk about the “rotten egg” odor as if it was old food smelling up your refrigerator — but simply put, the mélange of foul smelling sulfuric gases is extremely poisonous and deadly.