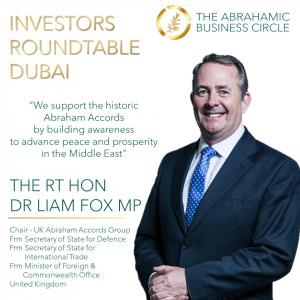 The Investors Roundtable Dubai will be held at Fairmont The Palm, Palm Jumeirah, Dubai – United Arab Emirates on this coming 29th of June, 2022. The networking event will be participated by its global members and invited special guests. Expected participants will be of more than 200 selected high-profile individuals from 26++ industries. Thought-leaders and Decision-makers will gather in one setting and, with their combined connections, they will promote economic diplomacy through investments.

The Rt Hon Dr Liam Fox MP has been a Conservative Member of Parliament for North Somerset since 1992. In John Major’s Government he served as a Minister at the Foreign & Commonwealth Office and as Government Whip (Lord Commissioner of the Treasury). He had previously served as Parliamentary Private Secretary to Michael Howard, then Home Secretary.

He was the UK’s Nominee to be the Director-General of the World Trade Organisation in 2020, nominated by Prime Minister Boris Johnson on behalf of the UK Government.

The UAE, Israeli and Bahraini ambassadors to the UK appointed the former British Secretary of State for Defence, and also the Secretary of State for International Trade, The Rt Hon Dr Liam Fox MP because of his vast experience in the Middle East and deep relationship with those countries. The UK Abraham Accords Group believes normalisation of relations with Israel will bring peace and prosperity to a new Middle East. They actively support the original signatories, UAE, Israel and Bahrain, through promoting dialogue, trade, interfaith and cultural cooperation. By working together, these nations will prosper as they create a secure environment based on understanding and commitment to building a positive future for generations to come.

The UK Abraham Accords Group and The Abrahamic Business Circle are sharing the same vision in economic prosperity across the region.

The Abrahamic Business Circle is an exclusive private members’ network focused on promoting global economic diplomacy through investments. The organization is composed of Private Investors, Entrepreneurs, UHNWI, Royal Families, Corporates and Diplomats. Our activities strive to demonstrate how entrepreneurship and investments from all part of the world can make positive changes in triple sustainability around the globe.

The Abrahamic Business Circle host events around the year. The international events may take place in Berlin, Zurich and Bogota with the support of the Governments of the host countries this year in 2022 and 2023. The organization is committed to show its determination for many years to come.

Dr. Raphael Nagel is the Founder and Chairman of The Abrahamic Business Circle and his vision is to bridge opportunities by promoting steadfastly Economic Diplomacy through investments. Dr. Raphael Nagel is a renowned Impact Investor and Investment Banker.

Email us at [email protected]