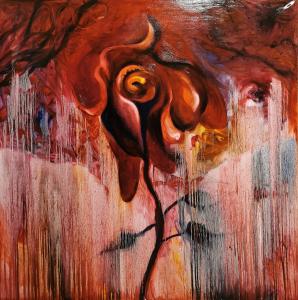 Painting of a Rose by Yury Kharchenko

BERLIN, GERMANY, June 7, 2022 /EINPresswire.com/ — The Richard Haizmann Museum in Kiel, Germany, hosts a solo exhibition of Russo-German artist Yury Kharchenko beginning June 10, 2022 and running through August 31, 2022. A vernissage with the artist takes place at the museum on June 10 at 7:30 p.m.

Titled “Superheroes in Front of the Auschwitz Gates Meet Sensitive Paintings,” and organized by the Kunstverein Niebüll, the exhibition presents two contrasting artistic phases of the artist.

Yury Kharchenko was born in Moscow in 1986 and came to Dortmund, Germany, with his family in 1998 as a Jewish refugee and has been living mainly in Berlin for the past twelve years. He faces his Jewish identity with paintings reflecting on his own family history and the anti-Semitism he experienced in Germany, as well as portraits of other Jewish personalities such as Siegmund Freud, Franz Kafka and Alfred Flechtheim, who founded the avant-garde of the 1930s. He has also portrayed modern personalities such as Amy Winehouse. This phase culminates in his most recent Auschwitz paintings, in which comic book personalities such as Superman, Batman, and Scrooge McDuck pose in front of the Auschwitz gates. The artist thus wrestles with the question of the utopia of heroism. At the same time, he points to a visible decline in the German culture of remembrance, which no longer fulfills its task of remembering, but is increasingly becoming a hook for political correctness.

If his Auschwitz images deal with an existential confrontation with the horror of the 20th century, his new flower paintings point to the visualization of the urge to live, which unfolds in the shadow of the omnipresent abyss of the world.

Since 2016, the Carl Kruse Art Blog –“Ars Lumens” — has highlighted the work of artists, past and present, focusing on wide-ranging movements in art history from Action Painting to Realism and covering topics from Jackson Pollock to the Art of Atari. The blog is curated by Carl Kruse who trades time between Miami, Florida and Berlin, Germany.