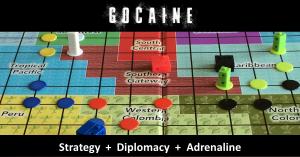 We are now working on increasing distribution through retailers and into other regions. GoCaine will soon be available in Germany.”

TORONTO, ONTARIO, CANADA, June 2, 2022 /EINPresswire.com/ — GoCaine, the multiplayer Go strategy board game in which 2-6 players compete to build the most lucrative product distribution network, is now available in the UK and Mexico.

GoCaine uses area control mechanics from the ancient game of surrounding stones known as Weiqi in China, Baduk in Korea, and Go in Japan. It is a game of both area control and logistical and economic efficiency. Players deploy multipurpose security cells to gain control of territory from which they can buy, ship, or sell product. Profits are used to expand and improve smuggling pipeline infrastructure. Players buy political influence to protect their shipments from interdiction operations and to utilize law enforcement to disrupt opponents’ supply lines. Alliances can be made and broken, making for lively social interaction. Detailed information about the game can be found on the company’s website, gocaingame.com, and on the boardgamegeek.com database.

Kharitago Games released GoCaine last year in a soft launch in the US and Canada using predominantly online distribution channels. “We are now working on increasing distribution through retailers and into other regions. GoCaine will soon be available in Germany,” says Richard Nguyen-Marshall, game designer and CEO of Kharitago Games. “After Germany we will expand through the EU and plan on being available in Japan and Korea by year’s end.”

The word Kharitago is a made-up word combining a Romanization of the Arabic word for map with the Japanese word for the strategic game of surrounding stones (Go). Kharitago Games Inc. is based in Toronto, Canada.