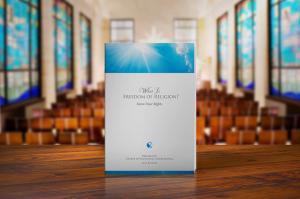 What is Freedom of Religion booklet – created by Church of Scientology

BRUSSELS, BELGIUM, May 5, 2022 /EINPresswire.com/ — Freedom of Expression, Thought, Opinion and Information, needless to say, are fundamental rights to be protected by all citizens and all institutions. What should not be protected is the right to “willfully lie” or spreading hurtful rumors violating presumption of innocence. While everyone can do mistakes, when done, the reporters and publishers must be respectful of the right of those damaged by the lies, to have their truth published with the same strenght the lie was promoted by those who promoted it and relayed it.

On World Press Freedom Day May 3, the Church of Scientology emphasizes that with freedom must come responsibility.

As the Washington Post stated in a recent article, we live in “a media environment that thrives on conflict.” But when that conflict marginalizes people because of their religion, the consequences can be dire and so Scientology members are strong defenders.

For example in Europe, the Federation of Journalists”, is member of the Ethical Journalism Network, which according to its website, aims “to strengthen the craft of journalism and to promote for the public benefit high ethical standards in media through education, training and publication of useful research.”

They have been running the campaign #MediaAgainstHate throughout Europe, which they have led in a coalition of civil society organisations. Adding to these efforts, even if independently, the Church of Scientology International published a booklet (with a special target public being journalists) to clarify religious freedom and its ramifications in today’s troubled world, and to assist journalists, mainstream and freelancers, in a fair and factual reporting.

Media outlets and journalists are in generating a broad and general understanding of the religious diversity and the freedom of religion and belief and at the same time, provide news on religious freedom and issues affecting this right worldwide. It is with this in mind that the Church created the Scientology Religious Freedom website and its religious freedom blog, which promote responsible coverage of religion, religious beliefs and practices, and adherents.

For example, the Scientology Religious Freedom Blog covered two recent studies that found nearly 60 percent of print articles and just under half of all television clips in the British media associate Muslims with terrorism or extremism. But it is not only Muslims who suffer from slanted and biased media coverage. Hate crimes against Christians in 2020 rose 70 percent over the previous year in Britain, Germany, France, Spain and Sweden, and one factor was found to be “a high level of religious illiteracy” among journalists. Such rise on hate crimes motivated on the basis of religion, can also be evidenced by the recent 45 pages report published by the Intergroup on Freedom of Religion or Belief and Religious Tolerance of the European Parliament, led by MEPs Carlo Fidanza and Peter van Dalen entitled “The EU and Freedom of Religion or Belief 2017-2021”.

In India, mainline as well as social media is being blamed for anti-Muslim violence.

And this is not just a recent phenomenon. The U.S. Holocaust Memorial Museum has documented how media “served as an important tool to win over the majority of the German public who had not supported Adolf Hitler and to push forward the Nazis’ radical program, which required the acquiescence, support, or participation of broad sectors of the population.”

The Church of Scientology publishes the booklet “What is Freedom of Religion,” which can be downloaded from the website. The Church does so because a vital component in preserving this fundamental human right is ensuring an understanding of the right to freedom of religion or belief and its meaning under universal human rights principles and international human rights law.

The booklet is designed to inform the public regarding the detailed and complex nature of the right to freedom of religion for believers and religious organizations of every faith and none.

An important feature of this booklet, and one particularly relevant to United Nations World Press Freedom Day, is the “Charter on Journalistic Ethics in Relation to Respect for Religion or Belief.” This is a journalistic code for the coverage of religion. The code is based on the principle that journalists “are accountable for the social and political consequences of their actions and have a duty to maintain the highest ethical and professional standards.” The standards the charter puts forward are based on broadly accepted human rights codes and instruments referred to in the booklet.

In the mention charter says: “Journalists are accountable for the social and political consequences of their actions and have a duty to maintain the highest ethical and professional standards. Journalists shall scrupulously endeavor to report the truth; respect the right of the public to know the truth; ensure that any information they disseminate is fair and objective; promptly and prominently correct any material inaccuracies; and afford the right of reply in appropriate instances. The media [43] is responsible for any material released through it.”

The charter goes as deep as proposing that “A responsible media avoids discriminatory or denigrating references to religious beliefs and spiritual values. A responsible media does not refer to religions or religious institutions in a prejudicial, biased or pejorative context; when religious references are essential to the reported matter or facilitate understanding, they are made accurately, fairly, impartially and respectfully. A responsible media refrains from reinterpreting, misinterpreting, analyzing, assessing or examining religious beliefs or the expression of these beliefs. Instead, it maintains a strict duty of neutrality and objectivity—accepting what the religion puts forward as its true beliefs without disapproval, contempt, condescension, bias or ridicule.”

It is the responsibility of those who cherish freedom to ensure fair and accurate reporting of religion. Religious liberty has been likened to a canary in the coal mine—one we ignore at our own peril. Because when religious freedom is ignored, stifled or attacked it predicts the loss of other human rights.

From its beginnings the Church of Scientology has recognized that freedom of religion is a fundamental human right. In a world where conflicts are often traceable to intolerance of others’ religious beliefs and practices, the Church has, for more than fifty years, made the preservation of religious liberty an overriding concern.

The Church of Scientology publishes daily blogs on this website to help create a better understanding of the freedom of religion and belief and provide news on religious freedom and issues affecting this freedom around the world. “Interaction with news and specially with non biased journalists is key to the common task of creating a higher understanding and respect of the religious diversity we have in 21st century. Journalists can not do that job alone, and this is why we cooperate more and more with them in Europe” said Ivan Arjona, the President of the European Office of the Church of Scientology for Public Affairs and Human Rights.

The Founder of the Scientology religion is L. Ron Hubbard and Mr. David Miscavige is the religion’s ecclesiastical leader.