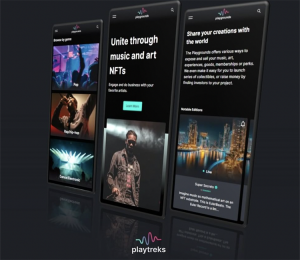 the PlayGrounds by PlayTreks NFT Marketplace

You can’t expect an artist to only spend time other than making music in front of a computer to figure out what’s happening to their music. An artist will make music, that’s what it is.”

DUBAI, DUBAI, UNITED ARAB EMIRATES, May 4, 2022 /EINPresswire.com/ — Who says superstars get to have all the music NFT fun? As jaw-dropping NFT-minting headlines abound, PlayTreks has been quietly building its blockchain solution for indie and DIY artists. Now, the pre-Series A company is hitting critical early thresholds on its ‘The Playgrounds’ NFT marketplace.

PlayTreks launched The Playgrounds with a fairly straightforward goal: to allow creatives to monetize their content by minting them into Non-Fungible Tokens (NFTs). Several months later, the early stages of that mission are taking shape.

‘The Playgrounds’ is now sparking a surge in daily signups. According to stats shared by Playtreks founder and CEO Anjo de Heus, the burgeoning artist platform now counts more than 6,000 indie musician members. Given the early-stage nature of music NFTs, that’s enough to signal a proof-of-concept while forming a base of core users.

The company says it’s now preparing to reach 20,000 users by the end of the year, with most taking advantage of the platform’s music NFT capabilities. Earlier this year, Playtreks joined forces with DMN to further accelerate that ramp-up.

That includes composer and musical performer Chris Payne, who played with Gary Numan and was a co-writer of Visage’s early-80s synth-pop hit “Fade to Grey.” Chris Willis, a longtime David Guetta collaborator, is also on PlayTreks, as is Zaine Griff, whose collaboration credits include David Bowie and Hans Zimmer.

“Essawy is rocking with his art, selling a lot as NFTs, and a great ambassador. He also happens to be a music producer,” de Heus relayed.

As far as the music NFT scene goes, PlayTreks has become an interesting play.

According to HTF Market Intelligence, in terms of total NFT music revenue, PlayTreks has grabbed a market share of 4% on a global scale. That beachhead was accomplished in roughly one year, with PlayTreks quickly ramping up its platform capabilities and member artists.

Aside from its menu of music distribution capabilities, PlayTreks also functions as a data analytics platform that offers artists valuable information gleaned from content platforms like social media and streaming services. The addition of blockchain, NFT, and cryptocurrency components gives PlayTreks its most interesting competitive advantage.

“The goal was to bridge the data gap for all platforms, including streaming, social media, radio, and more,” de Heus explained.

With the Playgrounds’ blockchain technology and a controlled copyright mechanism, musicians can create, share, and mint different types of digital content. According to the PlayTreks model, that approach will propel musicians to distribute across traditional endpoints while also capturing the potentially lucrative upside of NFTs.

According to PlayTreks, musicians can have as many as seven different revenue sources using its platform. Artists can utilize any of those options in any combination. That diversified model could force reactions from more established distribution companies, as well as dedicated music NFT plays.

Those funding rounds suggest a similar future raise for PlayTreks, with a broader NFT boom increasing the odds.

In 2021, NFT sales volume skyrocketed to $25 billion. Interestingly, the transaction volume of NFTs was just over $40 million back in 2018. But by the end of 2021, NFT trading volume increased to $44 billion.

The market cap of the NFT sector is expected to reach $80 billion by the end of 2025. As of now, the growing excitement and shared interest in NFTs are arguably at an all-time high.

All of that is happening against a music industry growth surge. According to the IFPI, worldwide recorded music assets alone generated $25.9 billion in 2021, up 18.5 percent year-over-year. The IFPI reported revenues of $21.6 billion in 2020, a 7.4 percent annual gain.

But that growth is potentially starting to taper. Just recently, Spotify posted a modest Q1 gain of 2 million subscribers, which pales in comparison to earlier year-over-year surges. Suddenly, the industry is staring at a potentially saturated, slower-growing streaming music sphere, and looking towards fresh revenue-generating areas. That includes very early-stage but promising possibilities like the metaverse and music NFTs.

In late 2018, de Heus found himself in a studio with a DJ/producer and other artists. The musicians were on a rant about the music industry, which prompted the technologist de Heus to start probing for solutions to a range of issues. Anjo immersed himself in the business of producing music by starting a record label. He quickly started identifying serious problems.

“Something is big-time wrong,” Anjo told Creative Skills Europe, referring to his impressions of the music industry.

As a record label owner, Anjo had to subscribe to more than 20 platforms to figure out what was happening with his artists’ music. It was a problem with disparate data analytics, and de Heus concluded that a huge gap existed between streaming platforms and the artists who use them.

Anjo De Heus’ vision was to make a transformative change within the music industry using data and technology to allow artists to manage their logistics within a single platform.

“This was a pretty ambitious project, but today… we really see that this is a very attractive proposition,” Anjo said.

The PlayGrounds, a key player in the NFT Music industry