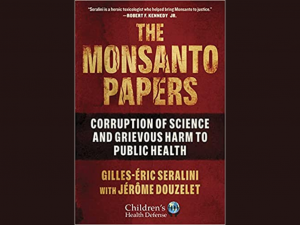 The Monsanto Papers: Corruption of Science and Grievous Harm to Public Health

“The Monsanto Papers: Corruption of Science and Grievous Harm to Public Health”, with a forward from attorney Michael L. Baum, is available now.

Monsanto orchestrated hit jobs in response to Seralini’s findings in order to preserve Roundup’s market share, or in Monsanto’s terms, to maintain its “Freedom to Operate.””

LOS ANGELES, CA, UNITED STATES, May 3, 2022 /EINPresswire.com/ — The latest book from renowned scientist Gilles-Éric Seralini and chef Jérôme Douzelet details the lengths Monsanto Company went to compromise scientific journals, capture regulatory agencies, and deceive the public on the safety of its flagship herbicide, Roundup. Using the company’s own internal documents, studies, and other memoranda, the authors tell the David vs. Goliath story of an independent scientist (Seralini) who exposed the dangers of Roundup, then for years was a company target.

Monsanto’s focused attacks on Dr. Seralini started when he had the temerity to investigate Monsanto’s own 2004 study that was used to obtain regulatory approval for Roundup. Those attacks reached a fever pitch when Dr. Seralini published a study in 2012 showing the effect on the liver and kidneys of two blockbuster Monsanto products: Roundup and the genetically modified foods designed to survive the herbicide. The study showed:

• 80% of the rats that consumed Roundup for two years developed tumors, whereas only 30% of the control group had tumors

• Rats treated with Roundup had larger (30% to 130%) tumors compared to the controls.

Millions of people saw photos of the tumor-swollen rats in the Seralini study, which went viral and quickly became a PR disaster for Monsanto. Sensing a threat to its profit-driving product, Monsanto worked behind the scenes to smear, discredit, and intimidate Seralini and his colleagues, all while conducting fraudulent research to counter Seralini’s findings and quell safety concerns.

Monsanto’s actions remained largely under the radar until 2017 when the Baum Hedlund law firm and others litigating Roundup cancer cases against Monsanto sought to de-designate thousands of confidential documents and make them available to the public. These documents, later dubbed the “Monsanto Papers,” show how far Monsanto’s cynical attempts went to discredit Seralini and cover up its scientific fraud.

Attorney Michael L. Baum, one of three people who wrote forwards to “The Monsanto Papers: Corruption of Science and Grievous Harm to Public Health,” describes several revelations contained in the internal company documents:

Monsanto orchestrated hit jobs in response to Seralini’s findings in order to preserve Roundup’s market share, or in Monsanto’s terms, to maintain its “Freedom to Operate.” Monsanto decided to maintain its “Freedom to Operate,” notwithstanding awareness among the company’s own scientists that they couldn’t truthfully say Monsanto had established Roundup was not carcinogenic — Monsanto had purposely avoided and cleverly navigated the regulatory testing that would show the Roundup formulation’s carcinogenicity.

So rather than actually conduct the long-term tests and alert, at that point, almost the entire population that the magic weedkiller and protector of genetically modified crops might be carcinogenic, Monsanto set out to suppress critics.

Monsanto had different names for these suppression programs, such as “Freedom to Operate,” or “FTO,” “Let Nothing Go,” “Whack-a-Mole,” “Project Spruce,” etc. The programs were conducted surreptitiously, sometimes using actual corporate and retired intelligence community spies, so people like Seralini and the scientific community would not know why an article got rejected, or why a published article got retracted … or why careers got ruined, funding dried up, jobs got lost or consumers died of non-Hodgkin lymphoma.

Baum Hedlund, a leading law firm litigating cases against Monsanto, made it a goal to get key Monsanto internal documents unsealed and published. The firm’s attorneys believe it is a civic duty to share documents like the Monsanto Papers so the public, media, academics, policymakers, regulators, and others can make more informed choices about consumer products.

R. Brent Wisner, Baum Hedlund’s vice president, was co-lead counsel in two of the first three Roundup trials. According to Wisner, the firm’s decision to publish the Monsanto Papers sets Baum Hedlund apart from other firms:

“We get these really incredible documents that affect people’s public health, and we make a point to get them unsealed. Most lawyers don’t bother or care to do that because it doesn’t really affect the case, but for us, it’s a greater good kind of thing.”

One particular document in the Monsanto Papers details how Monsanto went to great lengths to suppress and retract Seralini’s work. In an internal performance review of David Saltmiras, a Monsanto employee, Saltmiras boasted about his role in working with Wallace Hayes, the editor of the journal Food and Chemical Toxicology, which published Seralini’s 2012 study. Per Saltmiras, he convinced scientists to write letters to the editor to call for the retraction of Seralini’s paper:

“Throughout the late 2012 Seralini rat cancer publication and media campaign, I leveraged my relationship with the Editor in Chief of the publishing journal, Food and Chemical Toxicology, and was the single point of contact between Monsanto and the Journal.”

Saltmiras’ efforts were successful. Food and Chemical Toxicology ended up retracting the Seralini study. Prior to the journal’s retraction, editor Wallace Hayes had received a substantial consulting contract from Monsanto, something he did not disclose in his official statement regarding the retraction of the Seralini article. The journal has strict guidelines about authors disclosing conflicts of interest, but apparently, the guidelines did not apply to Hayes.

Seralini and Douzelet give readers a front-row seat to see for themselves Monsanto manipulating peer reviews, ghostwriting scientific articles, suppressing science that undercut Roundup’s safety, and feeding pre-written stories for members of the media to “independently” publish. Using Monsanto’s own internal documents as evidence, the book shows how far corporate giants will go to suborn science in the name of protecting profits.

Buy “The Monsanto Papers: Corruption of Science and Grievous Harm to Public Health” on Amazon