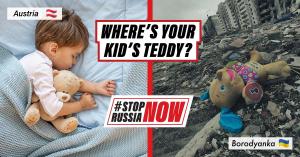 The billboards arrived in Vienna, and the digital campaign reached 62M users in 36 hours. It encourages people to exert influence on political leaders.

We have to exert pressure in the form of sanctions. It’s time to impose a complete embargo on Russian energy resources.”

The crucial goal of the campaign is to show the need for tougher sanctions against Russia. Billboards and digital ads describe the brutal war crimes Ukrainians face every day. The organizers also emphasize that it is time to stop using Russian oil and stop financing Russian aggression.

As the Prime Minister of the United Kingdom Boris Johnson says, “We have to exert pressure in the form of sanctions. It’s time to impose a complete embargo on Russian energy resources.”

It is time to mobilize people and political leaders, unite the efforts, and exchange experiences that would allow the European countries to break ties with Russia.

“Germany could learn from Poland what responsible energy policy looks like,” says Jan C. Behrends, Prof. of History at the European University Viadrina.

Forming one strong diplomatic front will make the end of the war in Ukraine closer.

Exert political influence on your authorities

#Stoprussianow campaign is spreading wide and fast. The billboards have arrived in such European cities as Paris, Hamburg, and Vienna. Each material signifies the scream of the Ukrainian people.

If you check out the #StopRussiaNOW website, you will see additional ways how to help the people of Ukraine. For instance, donating to the Armed Forces of Ukraine, spreading information on social media, and boycotting brands that do business in Russia.

One of the essential steps is putting pressure on political figures by sending emails to show that you disapprove of Russian aggression. The message is already written and waiting to be sent out. The system has already generated more than 100 000 emails. Learn more on stoprussianow.eu.