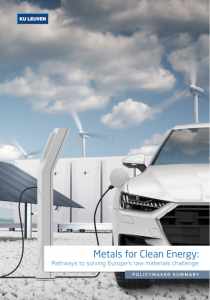 Cover of the KU Leuven report, “Metals for Clean Energy”

Europe needs to decide urgently how it will bridge its looming supply gap for primary metals. Without a decisive strategy, it risks new dependencies on unsustainable suppliers”

LEUVEN, BELGIUM, April 25, 2022 /EINPresswire.com/ — Meeting the European Union’s Green Deal goal of climate neutrality by 2050 will require 35 times more lithium and 7 to 26 times the amount of increasingly scarce rare earth metals compared to Europe’s limited use today, according to a study from Belgian university KU Leuven.

The energy transition will also require far greater annual supplies of aluminium (equivalent to 30% of what Europe already uses today), copper (35%), silicon (45%), nickel (100%), and cobalt (330%), all essential to Europe’s plans for producing the electric vehicles and batteries, renewable wind, solar and hydrogen energy technologies, and the grid infrastructure needed to achieve climate neutrality.

But Europe faces critical shortfalls in the next 15 years without more mined and refined metals supplying the start of its clean energy system. Progressive steps will be needed to develop a long-term Circular Economy, which avoids a repeat of Europe’s current fossil fuel dependency.

On March 8, European Commission President Ursula von der Leyen called for European independence from Russian oil, coal and gas, saying “we simply cannot rely on a supplier who explicitly threatens us. We need to act now to… accelerate the clean energy transition. The quicker we switch to renewables and hydrogen, combined with more energy efficiency, the quicker we will be truly independent and master our energy system.”

The independent KU Leuven study is the first to offer EU-specific numbers related to the International Energy Agency’s warning in 2021 of looming supply challenges for the enabling metals needed to help end fossil fuels.

The study says that by 2050, Europe’s plans for producing clean energy technologies will require annually:

4.5 million tonnes of aluminium (an increase of 33% compared to today’s use)

“Although the EU has committed to accelerate its energy transition and produce a great deal of its clean energy technologies domestically, it remains import dependent for much of the metal needed” the study says. “And there is growing concern about the security of supply.”

According to the study, Europe could face problems around 2030 from global supply shortages for five metals especially: lithium, cobalt, nickel, rare earths, and copper. EU primary metals demand will peak around 2040; thereafter, increased recycling will help the bloc towards greater self-sufficiency, assuming major investments are made in recycling infrastructure and legislative bottlenecks are addressed.

Liesbet Gregoir, lead author at KU Leuven, commented: “Europe needs to decide urgently how it will bridge its looming supply gap for primary metals. Without a decisive strategy, it risks new dependencies on unsustainable suppliers”.

The study recommends that Europe link with proven responsible suppliers managing their environmental and social risks, questioning why the bloc has not yet followed other global powers like China in investing into external mines to drive ESG standards directly.

“A paradigm shift is needed if Europe wants to develop new local supply sources with high environmental and social protections. Today we don’t see the community buy-in or the business conditions for the continent to build its own strong supply chains. The window is narrowing; projects really need to be taken forward in the next two years to be ready by 2030”.

The study says there is theoretical potential for new domestic mines to cover between 5% and 55% of Europe’s 2030 needs, with largest project pipelines for lithium and rare earths. But most announced projects have an uncertain future despite Europe’s comparatively high environmental standards, struggling with local community opposition and permit challenges, or relying on untested processes.

Europe would also need to open new refineries to transform mined ores and secondary raw materials into metals or chemicals. Europe’s energy crisis makes new refining investment challenging and skyrocketing power prices have already caused the temporary closure of nearly half the continent’s existing refining capacity for aluminium and zinc, while production has increased in other parts of the world.

Coal-powered Chinese and Indonesian metal production is projected to dominate global refining capacity growth for battery metals and rare earths in the next decade. In the spotlight after the Ukraine invasion, Europe also relies on Russia for much of its imported supply of aluminium, nickel and copper.

The study recommends that Europe links with proven responsible suppliers managing their environmental and social risks, also questioning whether the bloc should support investments into external mines to drive ESG standards directly.

The metals in scope today contribute around 3% of the world’s greenhouse gas emissions. Metals and mining operations must manage their local biodiversity impacts, waste, and local pollution potential, while securing human rights.

The study finds that by 2050, locally recycled metals could produce three quarters of Europe-made battery cathodes, all its plans for permanent magnets production, and significant volumes of aluminium and copper.

“Recycling is Europe’s best chance to improve its long-term self-sufficiency. It’s a step-up that our clean energy system will be based on permanent metals which can be recycled indefinitely, compared with today’s constant burning of fossil fuels”. The bloc, however, “must act strongly now to raise recycling rates, invest in the necessary infrastructure, and overcome key economic bottlenecks.”

Recycling “will not provide a viable EU supply source to Europe’s electric vehicle batteries and renewable energy technologies until after 2040, however.” the study clarifies. Release in full: https://www.eurekalert.org/news-releases/949848